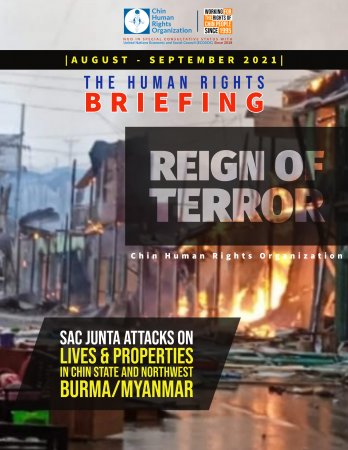 This briefing covers the situation of human rights, which were documented by the Chin Human Rights Organization in northwestern Burma/Myanmar, primarily in Chin State, Sagaing and Magwe Regions, between August and September 2021. Under the reign of terror imposed by the junta, hundreds have been arrested, dozens of people killed, injured and thousands exiled in a matter of months.

Evidence contained in this briefing demonstrates that there is a clear pattern of serious violations of international human rights and humanitarian laws, which are being committed by the Burmese/Myanmar military junta State Administration Council (SAC) against civilian populations with complete impunity.