At least 28 airstrikes hit near the Thai-Myanmar border yesterday, reports the Thai Enquirer, as the military junta conducts airstrikes close to the Thai border.

The Karen Human Rights Group said the footage obtained from the Thai side of the border appears to show air raids targeting a civilian area and reveals a drone conducting reconnaissance over a village before deploying military jets to bomb the area.

Burma Campaign UK has added 56 more companies to its ‘Dirty List’, reports Mizzima, where there is evidence of links to the Burmese military, human rights violations or environmental destruction.

Fifteen Russian companies have been added to the list. “Countries like the USA, Japan and South Korea have arms embargoes but still allow their companies to help fund the military so they can buy arms from countries like Russia and India,” said Mark Farmaner, Director of Burma Campaign UK.

At least 25 national and international rights bodies and civil society organisations, including Burma Campaign UK, have made an urgent call for the government to support the community-led learning facilities in Cox’s Bazar’s Rohingya refugee camps, reports Bangladesh’s Daily Star.

About 30 community-led schools have been shut down or dismantled by the authorities since December 2021, on the grounds that they don’t maintain the standards of education and hamper the activities of authorised schools.

The statement said the existing learning centres authorised by the government and operated by UNICEF and other humanitarian partners leave out the older (14+) age groups. And there are nearly half a million Rohingya children in Bangladesh who are deprived of education in an accredited curriculum since their refuge in August 2017.

Wai Hnin Pwint Thon, senior advocacy officer at Burma Campaign UK, condemned the guilty verdict and jail sentence delivered by a court in Naypyitaw to ousted leader Aung San Suu Kyi. In an interview with Associated Press, she said “These are trumped up charges, politically motivated, to keep her inside prison for such a long time.”

Wai Hnin Pwint Thon, whose own father is currently in jail in Myanmar for political protest, said the court’s ruling would galvanize opposition. “Arresting people doesn’t create fear, it creates more anger in the public,” she said. “Aung San Suu Kyi is just one of many, many political prisoners in Burma and I don’t want the world to forget that people have been arrested and been detained illegally every day in Burma.”

The Myanmar military continue to use airstrikes against civilians, forcing hundreds of thousands to flee from their homes. Rushanara Ali MP has urged the Government to introduce sanctions on Burmese and British companies that supply aviation fuel to the military.

Rushanara Ali chairs the All Party Parliamentary Group on Burma, which is administered by Burma Campaign UK. She put her question to Amanda Milling MP, the Foreign, Commonwealth and Development Office’s minister for Asia.

Myanmar’s pro-democracy forces have initiated a global “Blue Shirt” campaign to show solidarity with political prisoners, especially the over 10,000 people who were arrested after the February 2021 coup, reports Global Voices.

The Assistance Association for Political Prisoners (AAPP) announced the campaign on April 21 and highlighted the growing number of prisoners as the military government continues to detain individuals accused of supporting the Civil Disobedience Movement and the National Unity Government.

Wai Hnin Pwint Thon, senior advocacy officer at Burma Campaign UK, echoed this urgent call to the international community to continue speaking out for the immediate release of anti-coup activists. “These activists bravely stood up against the military coup, but the world seems to have forgotten about them. The international community must speak out for political prisoners in Burma and call for their immediate, unconditional release.”

The Burma army used Swedish made recoilless artillery shells to bomb the Karen National Army and their allies in recent fighting, reports Karen News, despite the munitions being prohibited.

In 2012 the Burma army used the same artillery in attacks against the Kachin Independent Army in Northern Burma – it is alleged the Swedish weapons were originally sold to India.

“Modi supplies arms to the Burmese military knowing that they are likely to be used against civilians,” said Anna Roberts, Executive Director of Burma Campaign UK. “Boris Johnson must call on Modi to stop arming the Burmese military, and to stop deporting Rohingya refugees.”

Several Indian companies are on the ‘Dirty List’ published by Burma Campaign UK, including Tata Group, which has supplied vehicles to the Burmese military.

Burma Campaign UK was among 39 signatories of letters sent to leading donors to the Rohingya humanitarian crisis including the European Commission, the United Kingdom, and the United States.

These donors have provided crucial support for Rohingya refugee children in Bangladesh. Education for many of those children is now in peril, reports Human Rights Watch.

The signatories ask these donors to publicly call on Bangladesh authorities to reverse their decision to close schools for tens of thousands of Rohingya children in the refugee camps in Cox’s Bazar who now have no access to education, and to urge like-minded governments to do the same.

Thank you NASUWT for the great support at your teachers conference this weekend. 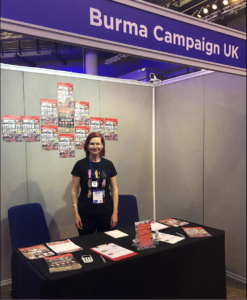 Fresh controversy has rocked the Chelsea bidding process, reports the Daily Mail. Roman Abramovich is being forced to sell Chelsea after being hit by sanctions from the UK Government due to his close links with Vladimir Putin.

A shortlist of preferred bidders established last month includes a consortium headed by the chair of Bain Capital, LA Dodgers owner Todd Boehly, the Ricketts family and a consortium led by Sir Martin Broughton. All of those bids have been hit by controversy.

Sir Martin Broughton’s bid has been criticised by Burma Campaign UK for his involvement with British American Tobacco and their relationship with the Burmese military.