September 2007 saw the biggest demonstrations in Burma since the 1988 uprising. Tens of thousands of monks led massive demonstrations in towns and cities across Burma. Thousands of Burmese civilians from all walks of life joined the protests to call for an end to military rule.

The protests started on 19 August after the regime raised fuel prices, without warning, by up to 500% on 15 August. The demonstrations that followed were led by prominent leaders of the ’88 Generation Students group of pro-democracy activists. The regime began a brutal crackdown on the peaceful demonstrators, arresting hundreds of people, including many of the protest leaders. Activists were forced into hiding as the regime launched a manhunt against the organisers. However, despite the regime’s continued campaign of intimidation, harassment and arrests, protests continued and took on a new momentum when Buddhist monks joined the demonstrations.

Monks first joined the protests on 28 August when they took part in a demonstration in Sittwe, north west Burma. On 5 September, tension escalated during a demonstration led by monks in the town of Pakkoku, near Mandalay, as regime soldiers fired warning shots and used tear gas to break up the peaceful protest. The monks, led by a coalition of monk groups called the All Burma Monks Alliance, demanded an apology for the violence, the release of all detained demonstrators and political prisoners and action to ease the economic hardship exacerbated by the fuel price rises. They gave the regime a deadline of 17 September to respond.

Monks marching through Rangoon during the 2007 uprising.

The junta’s failure to meet these demands triggered a new wave of nationwide protests. Initially wary of taking part in the demonstrations, bystanders cheered and showed solidarity with the monks. However, as the protests grew in size and spread throughout most of Burma, tens of thousands of ordinary Burmese from all walks of life joined the monks in the protests.

On 22 September a crowd of 2,000 monks and civilians walked past a roadblock and gathered outside Aung San Suu Kyi’s house. Aung San Suu Kyi left her house to greet and pray with Buddhist monks outside her gate. This was the first time she had been seen in public since 2003. The rally was a strong and clear display of unity between the monks and the pro-democracy movement.

By 24 September over 100,000 monks and ordinary citizens were marching in Rangoon and demonstrations were taking place in every state and division in Burma.

Despite some of the strictest media censorship in the world, Burmese activists were able to post pictures and videos of the demonstrations on websites and blogs, ensuring that images of the protests were seen worldwide.  The regime resorted to shutting off the country’s internet connection in an attempt to stop the flow of news and pictures getting out.

As the demonstrations grew larger, the regime stepped up security in Burma’s main cities and prepared to quash the protests. Burma Campaign UK sources in Rangoon reported regime plans to infiltrate demonstrations in order to spark violence, with soldiers ordered to shave their heads and dress as monks. On 25 September the regime imposed a curfew from 9pm to 5am and banned any gathering of more than five people. Hardened battle troops from conflict areas in Eastern Burma were redeployed to Rangoon.

On 26 September the regime began a massive crackdown against demonstrators.  Soldiers carried out dawn raids on monasteries. Monks were forcibly disrobed, severely beaten, kicked, and taken away by the security forces. During a raid in monasteries in Myitkyina, Kachin State, SPDC security forces reportedly beat four monks to death. The Assistance Association of Political Prisoners has reported that a total of 52 monasteries were raided during the crackdown. 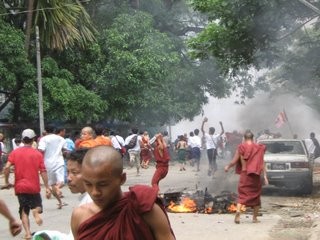 Army troops and riot police clubbed and tear-gassed protesters, fired shots on protesting monks and demonstrators, and arrested hundreds of the monks who were at the heart of the demonstrations. Shops and government offices were shut down, and all civil servants were sent home. Schools were also ordered to close. The crackdown continued for two more days as troops fired into the crowds and used tear gas to disperse demonstrators. Soldiers and police chased and beat protesters and took others away in trucks. Around 20,000 troops were deployed in Rangoon.

The regime’s official figures put the death toll at 10 people. However, up to 200 are believed to have been killed during the crackdown.  Horrific reports from Burma revealed that hospitals and clinics were ordered not to give any treatment to the wounded and that the army carried out secret night-time cremations of victims. 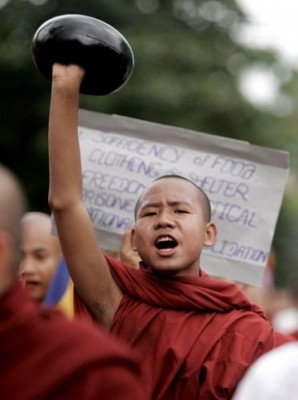 The regime arrested over 6000 people during the crackdown, including approximately 1400 monks. Many of the detainees sustained injuries during the demonstrations, but have been denied proper medical attention. Detainees are also subjected to physical torture, not given enough food or water, and many are kept in dirty, crowded facilities where the spread of disease is likely.

Despite the crackdown and continued heavy military presence in the streets of Burma’s main cities, Burma’s people have continued to defy the regime peaceful acts of resistance. For example, in several townships in Rangoon, dogs were seen roaming with pictures of Than Shwe and other regime leaders strung around their necks. Associating anybody with a dog is a very serious insult in Burma. Trains were painted with anti-junta slogans and anti-junta leaflets denouncing the brutal crackdown and calling for renewed struggle were secretly distributed in Akyab, Arakan State.

On 26 October, exactly a month after the violent crackdown, several groups of people dressed in yellow clothes and carrying yellow candles and flowers held prayers at Rangoon’s Shwedagon pagoda. And monks took to the streets again at the end of October when around 200 monks marched in Pakokku.

15 August 2007 The regime in Burma raises fuel prices, without warning, by up to 500%, effectively doubling transport costs overnight and driving up prices for food and other essentials.

19 August 2007 Prominent leaders of the ’88 Generation Students group of pro-democracy activists lead a public protest against price rises through the streets of Rangoon. The protests spread across the country.

21 August 2007 On the eve of a major protest in Rangoon, the regime arrests 13 leading democracy activists in midnight raids.

22 August 2007 Hundreds of protesters march through Rangoon but it is broken up by members of the pro-regime militia, the Union Solidarity and Development Association (USDA), backed up by police. More activists are arrested.

4 September 2007 About 1,000 people led by 15 NLD members march in Taunggok, Arakan State, demanding the release of two men arrested on 31 August for demonstrating against the rise in fuel prices.

5 September 2007 SPDC soldiers fire warning shots to break up a demonstration of about 500 monks in Pakokku, Magwe Division. Some of the monks are severely beaten and three arrested.

6 September 2007 A group of about 20 government officials are briefly held hostage by monks in Pakokku to secure the release of their three detained colleagues. The All Burma Monks Alliance give the regime a deadline of 17 September to respond to their demands, namely an apology for the crackdown on the peaceful demonstration in Pakokku, a cut in commodity prices, and the release of all political prisoners.

17 September 2007 The deadline for an apology passes with no word from the generals. The demonstrations increase.

18 September 2007 Buddhist monks hold series of protests in Rangoon and other cities throughout Burma on the anniversary of 1988 coup that brought current military regime to power. The monks say they will begin boycotting alms from members of the military regime and their associates. The demonstrations grow bigger by the day.

24 September 2007 Up to 100,000 march in Rangoon, making it the biggest anti-government protest since 1988. The rallies centre on the Shwedagon and Sule pagodas, and demonstrations take place in towns and cities across Burma.

25 September 2007 Thousands of monks and supporters again gather in defiance of threats of a military crackdown. The regime imposes dusk-to-dawn curfew in Rangoon and Mandalay. Internet access is blocked.

26 September 2007 The crackdown begins. Overnight troops raid monasteries containing thousands of monks and prevent other monks from leaving. Soldiers and riot police are deployed around monasteries in Rangoon and other cities. Other high-profile protesters are arrested. Tens of thousands still take to the streets. Several demonstrators are shot dead.

27 September 2007 A Japanese video journalist, Kenji Nagai, is shot dead at close range, after security forces use automatic weapons on protesters in Rangoon. Tens of thousands of people join protests that continue throughout the day.

29 September 2007 After several days of increasing web restrictions, the government cuts off internet access in Burma in an attempt to stop the flow of information.

2 October 2007 Gambari has meeting with Senior General Than Shwe.

11 October 2007 The United Nations Security Council issues its first ever formal statement on Burma urging the regime to release political prisoners, end the use of violence against civilians, and start a genuine dialogue.

15 October 2007 The European Union agrees a ban on imports of Burmese timber, metals and gems. It also threatens a ban on all new investment if the regime does not enter into genuine dialogue with the democracy movement.

25 October 2007 Aung San Suu Kyi holds talks with the regime’s newly appointed liaison officer, Aung Kyi, but no details of their discussion are made public.

Statements on uprising and arrests in August 2007

Statements on crackdown of the 2007 uprising

Monks marching through Rangoon during the 2007 uprising

View images of 2007 Saffron Revolution in Burma in the photo gallery here.