“Burma is an authoritarian country and if police were told not to use violence, it is very unlikely they would have behaved this way. Burma has been under authoritarian law for decades so police don’t act without permission. I believe the Burmese government gave police order to beat the protesters.” “The danger is that international aids are helping to modernise an authoritarian regime rather than help transition to democracy, so many people in Burma are questioning EU’s decision to provide training because even if they provide good training, police work for the government, which does not respect human rights. The EU needs to make sure that the training provided will not be then turned against protesters as it happened yesterday.” 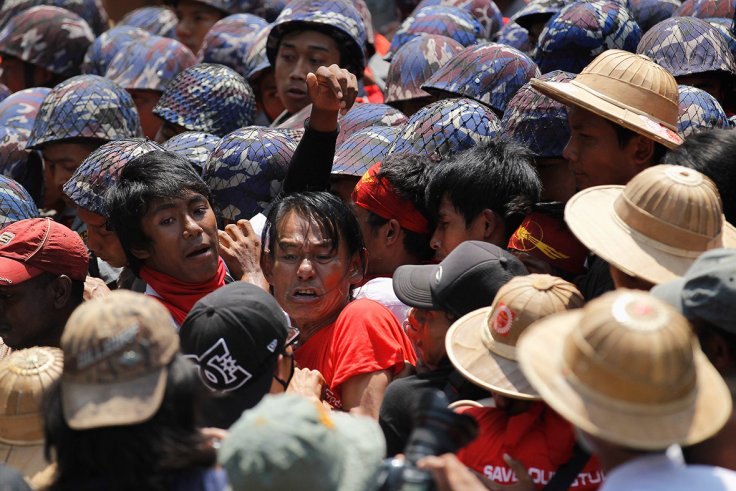 Quoted in The Irrawaddy, Mark Farmaner, director of the Burma Campaign UK, said any further training should be contingent on a repeal of repressive laws in Burma.
“[The] EU training Burma’s police in crowd control can only be effective if their political masters are willing to accept that people have the right to protest,” Farmaner told The Irrawaddy. “The government is still using the police as a means to control people, not protect them.” 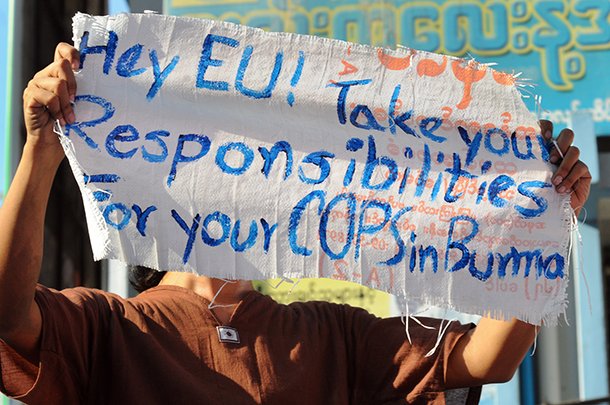 Our campaign is reported in City News,  Chiang Mai:

“Step One: The British government has set up teams of experts to investigate cases like this. They should lobby the Burmese government at the highest level to allow a team to be sent to Burma.

Step Two: Stop training the Burmese Army until they take concrete action to end impunity for rape, and take other steps to prevent rape.

Step Three: Support an international investigation into rape and sexual violence in Burma. These rapes are war crimes, and the UN should investigate,” Roberts wrote. 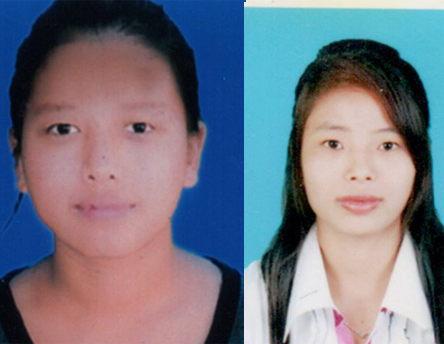 The delegation spoke in Parliament at a meeting of the All-Party Parliamentary Group for Democracy in Burma. The delegation consists of Sally Thompson, Executive Director of The Border Consortium (TBC), Luiz Kaypoe from the Karenni Refugee Committee (KnRC) and Naw Ta Mla Saw from Karen Women Organisation (KWO). TBC provides food, shelter, camp management and livelihoods support for 110,000 refugees in Thailand and 120,000 Internally Displaced Persons (IDPs) in Burma. KnRC is a grassroots organization that provides support to Karenni and other ethnic minority refugees from Burma currently residing in two camps in Thailand. KWO is a community-based organisation with a membership of over 49,000, working to empower Karen women to develop their own communities in education, health and social welfare. KWO also provides assistance for refugees and IDPs along the border areas. 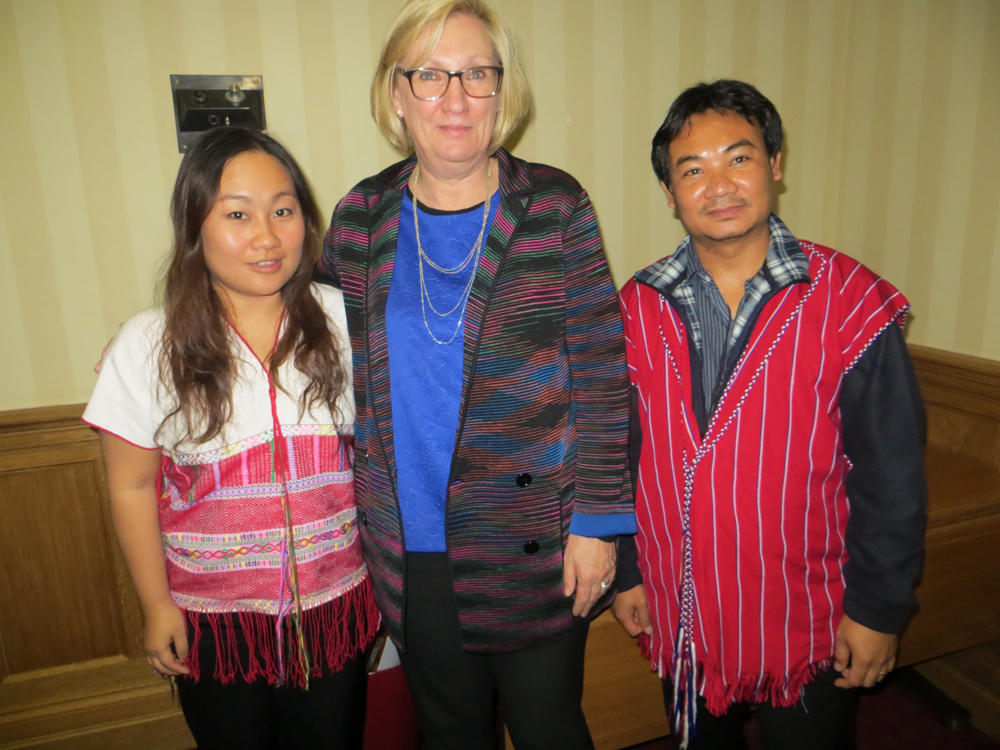 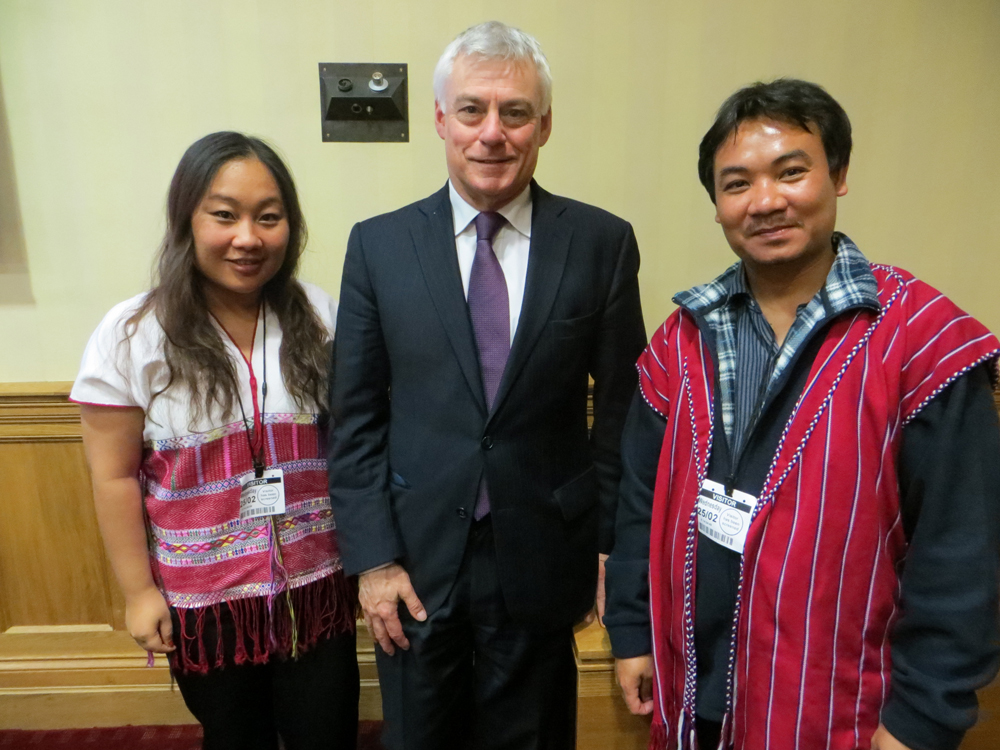 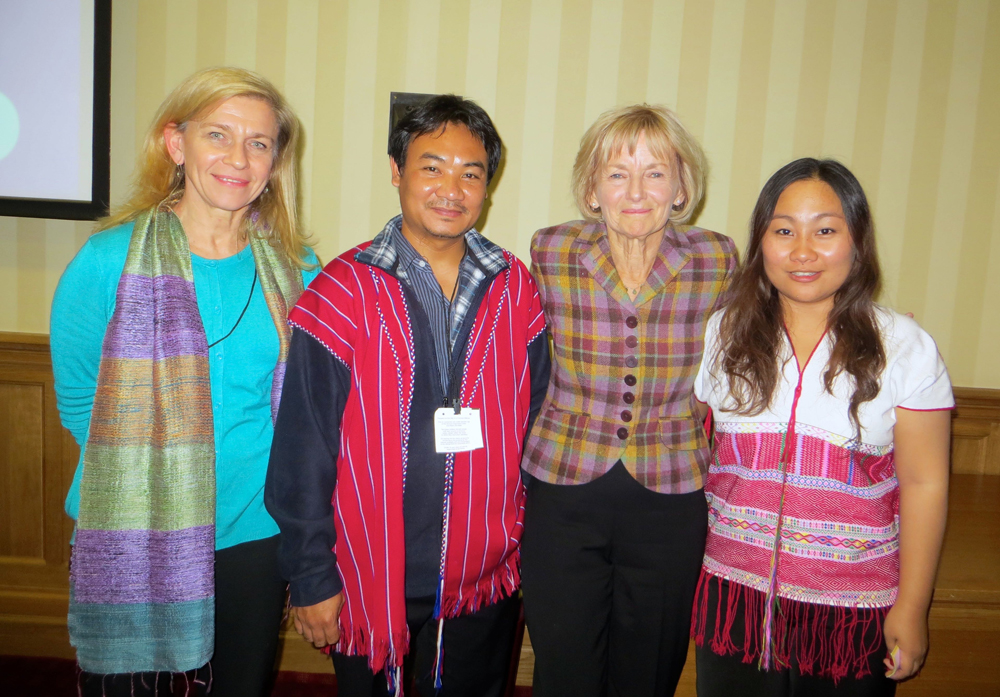 Our rose-tinted glasses campaign is reported in Karen News.

“A campaign by the Burma Campaign UK is trying to highlight ongoing human rights abuses in Burma.

To make its point, Burma Campaign has delivered more than 2,000 rose-tinted glasses, and issued photo petitions to the British Foreign Office to put pressure on the British government to a “return to putting human rights as their top priority in Burma,” the group said.” 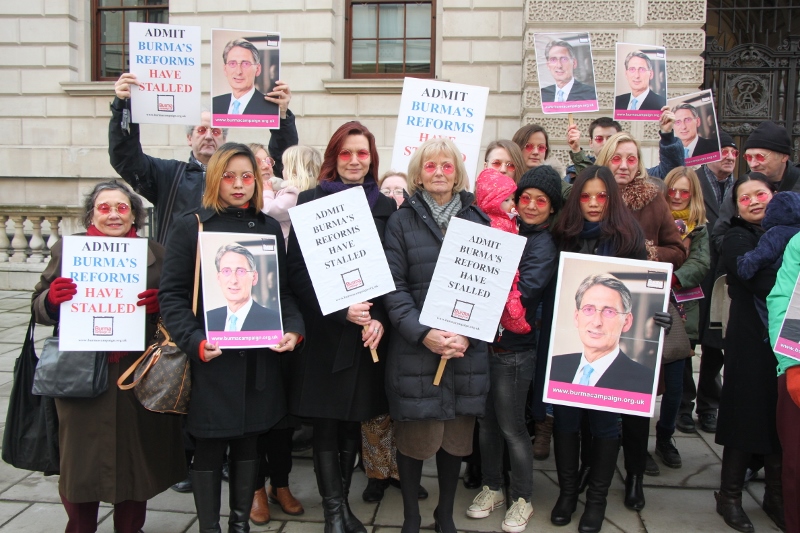 Our campaign for the repeal of Burma’s repressive laws and the release of political prisoners like Sein Than is featured in Mizzima News:

“Burma Campaign UK has launched a campaign to call on the Myanmar government to repeal the protest law and other repressive laws used to jail political activists and call for the release of political activist U Sein Than, jailed for two years for a peaceful protest.

The UK-based NGO called February 5 for people to email President U Thein Sein calling on him to free U Sein Than, the most prominent victim of the laws, and repeal the repressive laws used to jail him and other political activists.

Several other local and foreign activist groups have called for the repeal of the laws, claiming they hamper the freedom of citizens to protest peacefully, with courts delivering harsh sentences out of all proportion to their alleged “crimes.” Amnesty International has the activist on its list of prisoners of conscience and continues to call for his release.” 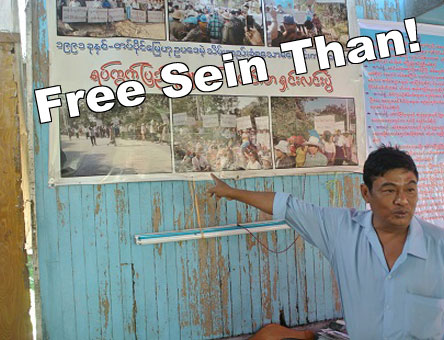 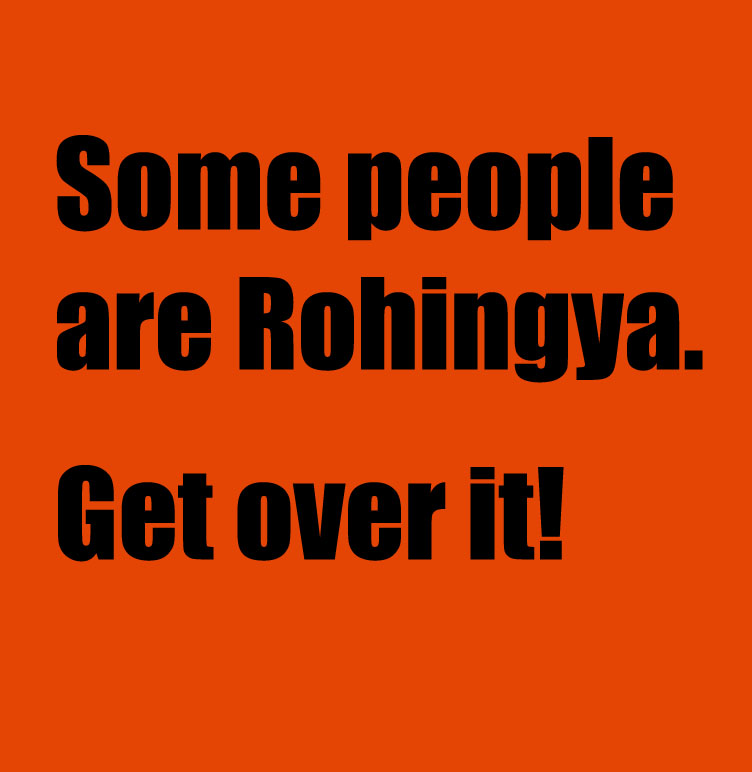 Burma Campaign UK was today joined by Baroness Kinnock, Baroness Nye, and supporters to deliver more than 2,000 rose-tinted glasses, photo petitions and campaign postcards to the British Foreign Office as part of our campaign to persuade the British government to stop looking at Burma through rose-tinted glasses, and return to putting human rights as their top priority in Burma. 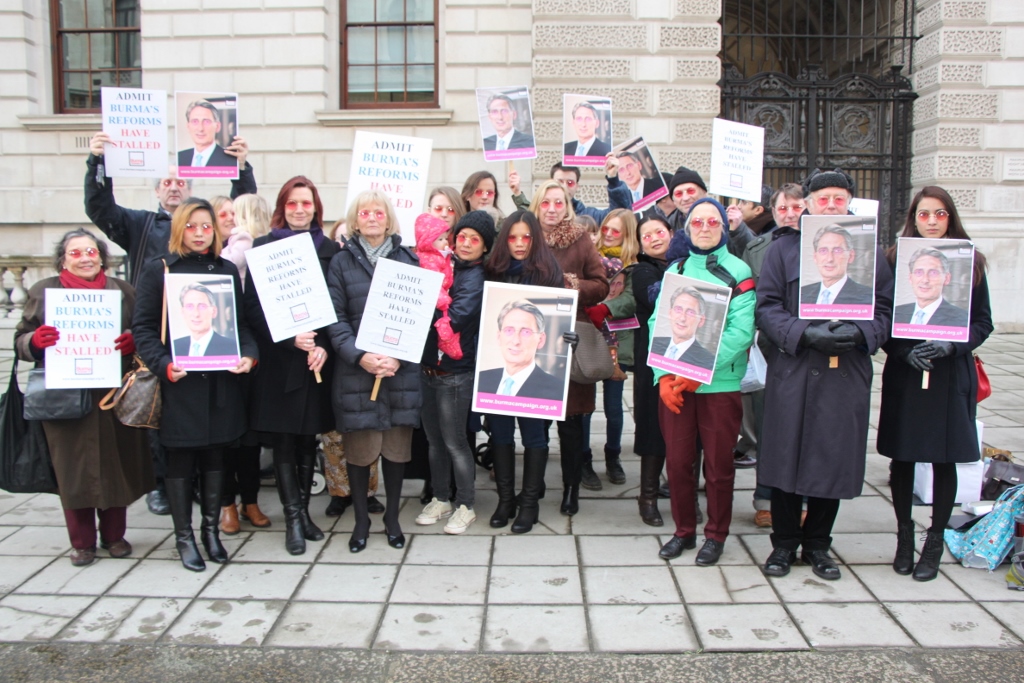 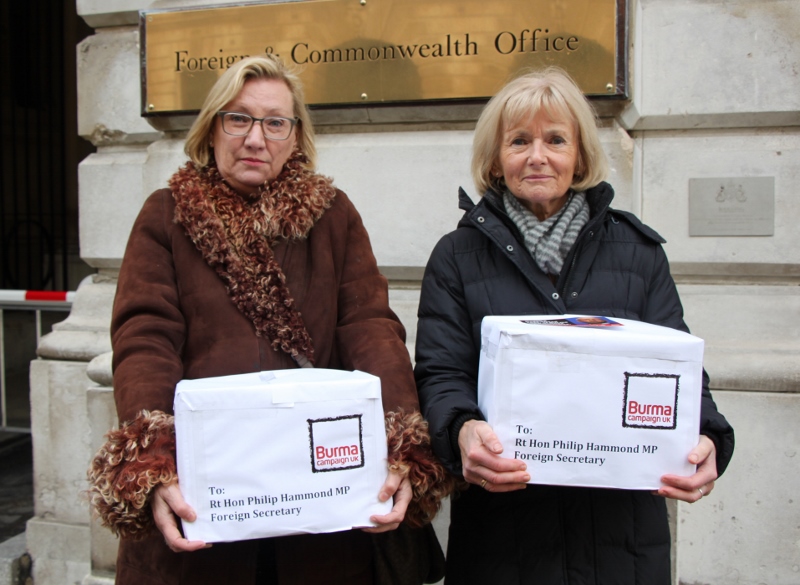 Dr Tun Aung, a 65-year- old political prisoner, was released yesterday. Thank you for those who took action to free Dr. Tun Aung.

He was arrested and jailed unlawfully by the military-backed government in Burma. He is a chairman of the Islamic Religious Affairs Council in Burm and was arrested and accused of fuelling the communal riots in his hometown, Maungdaw, Rakhine State. He was arrested in June 2012 and charged under six different counts, including the Myanmar Wireless Telegraphs Act and Section 24 (1) of the Foreign Exchange Regulation Act. He was sentenced to 17 years in prison but under a presidential amnesty, his sentence was reduced to one year in prison.

Burma Campaign UK is quoted in this news article about his release in Mizzima News:

“He [Dr Tun Aung] was arrested in June 2012 as part of the Burmese government’s efforts to arrest and detain Muslim community leaders to stop them from talking to international observers and journalists,” Burma Campaign UK said in May 2013. 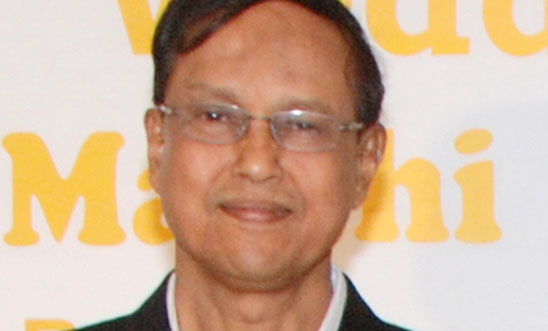 Where the Executioners Sue Their Victims December 18, 2014

Will the Burmese army ever face justice for its past war crimes?

“Those who committed crimes against my people are not only free but still in government,” said Zoya Phan.

She’s an ethnic Karen activist with Burma Campaign UK (BCUK), who fled her home in Manerplaw, eastern Burma, when it was invaded by the Burmese army in 1994. She was 14.