The war for truth in Myanmar’s cyperspace – Coda Story June 4, 2019

Facebook now has 18 million local users in Burma and is a parallel space for the conflict in Rakhine State, reports the website Coda Story.

A decision by New York Times Style Magazine editors to pair an article on Burma’s struggles with its “brutal history and violent present” with a high-end fashion shoot has prompted a social media backlash, says Coconuts Yangon.

“Using genocide to promote high-end fashion shows quite a lack of judgement and sensitivity. It’s a bizarre feature,” Mark Farmaner, director of Burma Campaign UK, told the online publisher. “It used genocide as a backdrop for a fashion shoot, makes the case against a tourism boycott which doesn’t exist, and manufactures a history of Burma which simply isn’t true.”

The UN’s fact-finding mission to Burma is calling for the military to be totally isolated, reports the Voice of America, because the leadership has done little to address widespread rights abuses around the country. The fact-finding mission is now seeking more information on the military’s business ventures in the hopes of helping countries to hit the generals in their pockets.

The World Bank is considering granting a $100 million loan to Burma to implement a “Rakhine Recovery and Development Support Project”, reports Coconuts Yangon. But rather than address the violence against Rohingya Muslims that has driven hundreds of thousands of them from the country, the plan could make the bank complicit in crimes against the persecuted minority.

Anna Roberts and Wai Hnin of Burma Campaign UK were at the teachers trade union NASUWT conference in Belfast this weekend. Lots of support for our campaign, including access to education for Rohingya children. 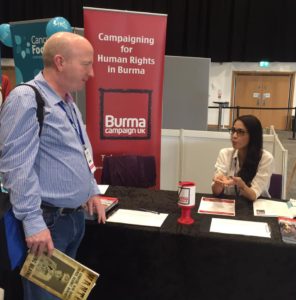 Mizzima reports on Burma Campaign UK’s call to the UK government to spend more on humanitarian aid to refugees and internally displaced people.

The proportion of British aid spent on humanitarian aid, which helps refugees and internally displaced people, has fallen, and now makes up just 17 percent of the budget. The UK government claims it is giving more aid to ethnic areas, but it is money for economic development, not extra humanitarian assistance to people living in the camps.

“Economic development is important, but people who have lost everything and have no way to earn a living should not be left in squalid camps without proper shelter, healthcare, food and education for their children,” said Anna Roberts, Executive Director of Burma Campaign UK. “They must be prioritised when decisions on aid spending are made.”

One of three Kachin activists jailed for six months just for organising peaceful protests to help free villagers trapped in the jungle after the army attacked their villages has been released, reports Mizzima.

A number of foreign activist groups had joined forces with activists in Myanmar and around the world demanding their release, and according to Burma Campaign UK the pressure worked.

Al Jazeera reports on progress following the publication of Burma Campaign UK’s “dirty list”, which named and shamed 49 companies from the US, Europe, India, China and elsewhere that do business with the military or are involved in projects that threaten human rights. Some companies named in the dirty list have responded by pulling out of new projects in Burma.

But even amid calls for Burma’s top generals to be prosecuted for genocide, military-owned businesses have escaped new sanctions by foreign governments. “You would think that imposing sanctions stopping companies doing business with the military would be a no-brainer, but not a single country has done so,” said Mark Farmaner, director of Burma Campaign UK.

Bangladesh risks creating a “new crisis” for Rohingya refugees if it goes ahead next month with plans to relocate 23,000 refugees to an uninhabited island prone to cyclones, a United Nations human rights envoy has warned.

According to Al Jazeera, Yanghee Lee, the UN special rapporteur who visited Bhasan Char recently, told the Human Rights Council that she was unsure if the Bay of Bengal island was “truly habitable”.

Bangladesh has enlisted British and Chinese engineers to help prepare the island for the planned arrivals. British firm HR Wallingford is involved in the project, and has been named on Burma Campaign UK’s “dirty list” of companies involved in projects related to human rights violations. 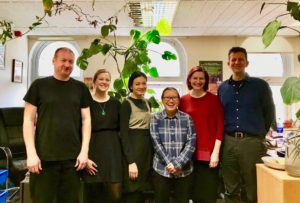