Journalists jailed for seeking to expose massacre of Rohingya villagers

Being a journalist is dangerous in Burma today. Both the military and Aung San Suu Kyi’s government target journalists who report the truth about what is happening in the country.

On 3 September 2018, two journalists who work for Reuters, Wa Lone and Kyaw Soe Oo, were jailed for seven years for seeking to expose how security forces and nationalists had massacred Rohingya villagers last year. They were framed and charged under the Official Secrets Act.

Their bravery in seeking to expose the truth despite the risks is inspiring.

Normally at a time like this we ask you to send an email to the Burmese government or British government asking them to do more.

This time we’d like you to do something different. Something that will take more time, and even cost you money. But something we think will help make a difference.

We’d like you to write to Wa Lone and Kyaw Soe Oo. Send them a letter or card at the prison they are jailed in. 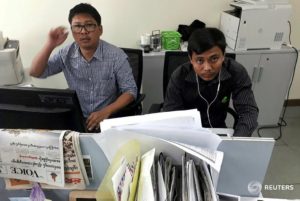 Wa Lone has a daughter who was born while he was in jail. Kyaw Soe Oo has a four year old daughter, who he tries to hold on his way into court for his trial despite the manacles on his wrists.

These two journalists have been torn from their families. They and their families are paying a terrible price making sure the world knows what’s going on. They need our support at this dark time for them. Let’s show them how much support they have around the world.

Write to Kyaw Soe Oo and Wa Lone at:

C/O The Governor of Insein Prison

In many countries now you don’t need to go to a post office, you can buy and print the postage online. In the UK you can do so here: https://www.royalmail.com/price-finder

Activists and journalists continue to be arrested in Burma and political prisoners remain in jail.