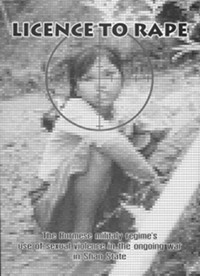 A report released by the Shan Women’s Action Network (SWAN) and the Shan Human Rights Foundation (SHRF) on the systematic use of rape by the Burmese military.

It details 173 incidents of rape and other forms of sexual violence, involving 625 girls and women, committed by Burmese army troops in Shan State, mostly between 1996 and 2001.  The report gives clear evidence that rape is officially condoned as a ‘weapon of war’ against the civilian populations in Shan State. The report also explores some of the physical and mental effects of the rapes on the survivors, who suffered not only from the lack of legal redress for the crimes, but also the lack of any crisis support.