Burma Campaign UK today welcomed notification from the Foreign, Commonwealth and Development Office (FCDO) that it is bringing in new rules to prevent the Burmese military benefitting from investment in Burma by CDC Group, the UK’s development finance institution.

Burma Campaign UK has been lobbying for stricter policies since 2017, when Irrawaddy Green Towers, a company which received funding from CDC Group and many other development finance organisations, started to work for the military-owned Mytel mobile phone network. In 2018 the International Development Committee of the British Parliament also raised concerns.

Nigel Adams MP, the Minister responsible for Burma within the FCDO, responding to a letter from Burma Campaign UK, stated, “…we have asked CDC to strengthen its due diligence and the due diligence work of the companies that they invest in, in order to work to exclude military-owned companies from the supply chains and customer lists of those companies.”

“I want to assure you that we remain committed to working to ensure that UK taxpayer money does not go to the military, either directly or indirectly. We will continue to strengthen our enhanced private sector due diligence regime and our efforts with partners to prevent UK money being used to purchase goods and services from military owned companies, whilst continuing to support investment to benefit the people of Myanmar.”

“These new policies to prevent the Burmese military benefitting from UK investment aid are very good news,” said Mark Farmaner, Director of Burma Campaign UK. “We are pleased to see the British government take the lead internationally in steps to stop international aid reaching the Burmese military. It is time the EU, USA and other countries did the same.”

In addition to the new rules on CDC Group investment, the British government has also introduced rules to stop recipients of UK aid using that aid to buy goods and services from the military, and ensured military companies were removed from a Burmese government trade promotion website which has been funded by UK aid. The British Embassy in Burma also has a policy not to source goods and services from military companies.

“The British government has taken positive action to prevent UK investment aid benefitting the military, and now we would like them to go one step further and introduce targeted sanctions to also prevent British companies doing business with the military,” said Mark Farmaner.

FCDO gave Justice For Myanmar the following statement: “Economic development in Myanmar has lifted 11 million people out of poverty since 2010. We remain concerned by the role of the military, which has vast interests across Myanmar’s economy. The UK is committed to supporting inclusive and sustainable economic growth and responsible investment in Myanmar which will continue to create jobs, reduce poverty and open up Myanmar’s economy to international standards and practices. We work closely with NGOs and businesses on economic growth and will continue to respond actively to legitimate concerns of stakeholders. This is demonstrated by our swift response to the inadvertent publication of military businesses on a UK funded web page.”

The new Myantrade website was launched on Oct. 21, 2020, as part of the $5 million UK aid funded Myanmar Trade and Investment Project. It is implemented by the International Trade Centre, a joint agency of the United Nations and World Trade Organisation, in conjunction with the Myanmar government.

Justice For Myanmar spokesperson Yadanar Maung says: “Military cartel business like those listed on Myantrade provide revenue that is distributed throughout the military, including military units that commit genocide, war crimes and crimes against humanity. The UK government’s swift action prevents the military from financially benefiting from UK aid and denies them legitimacy. With small steps like this, the military cartel will be dismantled. We hope the UK government will take further steps in the right direction.”

However, the British government has so far failed to implement the UN Fact-Finding Mission recommendations to impose targeted sanctions on Myanmar military companies and their owners, which is crucial for accountability and for the removal of the military from the economy. The military must be placed under civilian democratic control for Myanmar to achieve a federal democracy and sustainable peace.

Yadanar Maung adds: “It is urgent that donors and agencies working in Myanmar exercise heightened human rights due diligence and put in place strict policies and actions to ensure that they do not benefit the Myanmar military and its business interests in any way.”

Justice For Myanmar, a group of covert activists campaigning for justice and accountability for the people of Myanmar, is calling for an end to military business and for federal democracy and a sustainable peace.

For details on how MEHL dividends are distributed throughout the Myanmar military, see Amnesty International report “Military LTD”, which used MEHL data shared by Justice For Myanmar.

See the source data on the Justice For Myanmar website here.

See the FCDO development tracker on the project here. 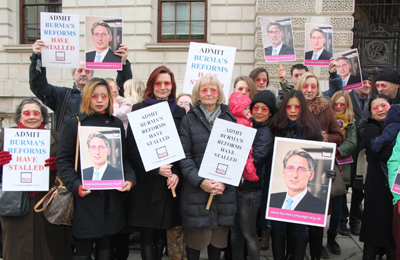 If you are holding a Burma-related event and would like it added here, please email info@burmacampaign.org.uk