Charges Against Journalist Aung Marm Oo Must Be Dropped

Burma Campaign UK today called for charges against Aung Marm Oo, editor of the Development Media Group, to be dropped, and called on the government of Burma to repeal repressive laws used to arrest and jail journalists.

Aung Marm Oo, also known as U Aung Min Oo, is in hiding after receiving death threats and being charged under the Unlawful Associations Act 17/2 for his media group reporting on human rights abuses by the military.

“At the same time as the international community were hailing the release of Reuters journalists Wa Lone and Kyaw Soe Oo, and hoping it would signal progress on media freedom in the country, Aung Marm Oo was facing arrest for reporting on military human rights violations”, said Mark Farmaner, Director of Burma Campaign UK. 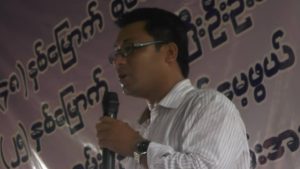 Journalists at the Development Media Group have been interrogated by Special Branch police and Aung Marm Oo’s family members have also been questioned.

The Unlawful Associations Act is frequently used by the military to arrest and jail journalists and activists. It effectively allows the military and police to use any contact with a member of an ethnic armed organisation to be considered as providing assistance or promotion or being a member of that organisation.

As the military has stepped up its operations against the Arakan Army in Rakhine State, it has been deliberately targeting civilians, with civilians being killed, tortured, arrested and displaced. Human rights violations by the military against the local ethnic Rakhine population and others fit the legal criteria of crimes against humanity and war crimes.

These violations of international law by the Burmese military come less than two years after a huge military operation against the Rohingya, also in Rakhine state, which displaced 700,000 people and has been assessed by the United Nations as genocide and crimes against humanity. The main international response by governments to this genocide has been to ban a small number of members of the military and security forces from taking holidays in the USA, Canada and EU member states. This lack of effective action has emboldened the Burmese military to believe they can act with impunity.

“It is the military, not the civilian side of the government which has brought these charges, but the NLD-led government does have the power to repeal the Unlawful Associations Act and other repressive laws used to harass and jail journalists”, said Mark Farmaner. “There is a constant cycle of journalists in and out of jail with no end in sight. It is naïve to think the release of Wa Lone and Kyaw Soe Oo signified a change in approach towards the media. We’ll know there is genuine change when the law is changed.”

You can take action here to call for the charges against Aung Marm Oo to be dropped.