On the first anniversary of their arrest, Burma Campaign UK today urged Aung San Suu Kyi to immediately release Dumdaw Nawng Latt and Langjaw Gam Seng, and to repeal repressive laws which are being used to keep human rights activists, journalists, and ethnic people in jail.

In October 2017, Dumdaw Nawng Latt was sentenced to four years and three months and Langjaw Gam Seng was sentenced to two years and three months in jail. They were arrested in December 2016 for helping journalists from Rangoon report on the situation in Mong Ko, the site of heavy fighting between the Burmese Army and a coalition of ethnic armed organisations. The Burmese Army has been accused of deliberately targeting civilians and committing war crimes and crimes against humanity in the conflict.

On 24th December 2016, the two Kachin pastors were taken by the Burmese Army, who left no information for the family about their arrest or their whereabouts. Only three weeks later, the Burmese Army released the information that the two pastors were detained for supporting ethnic armed organisations. The Burmese Army accused them of being informers, recruiters and financial supporters for ethnic armed organisations. They were charged under three different counts, including under the Unlawful Associations Act.

“Many ethnic people have been targeted and charged under this law. It is within Aung San Suu Kyi’s power and she does have the parliamentary majority needed to repeal these repressive laws and release political prisoners,” said Anna Roberts Executive Director at Burma Campaign UK. “Aung San Suu Kyi has decided to not only to keep repressive laws in place and allow the military to use them, but also to keep innocent people like Dumdaw Nawng Latt and Langjaw Gam Seng in jail. Arbitrary arrests like this will continue in the future, if she fails to repeal repressive laws, including the Unlawful Associations Act.” 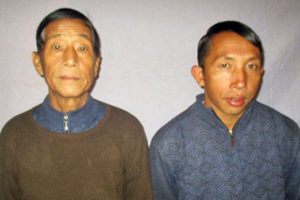 You can send an email action to appeal for the release of Dumdaw Nawng Latt and Langjaw Gam Seng here.