Student Activists Arrested for Telling Jokes about the Military

Burma Campaign UK today called on the NLD-led government to halt the prosecutions of the members of the Peacock Generation Thangyat group and to repeal repressive laws which are being used to keep human rights activists in jail. 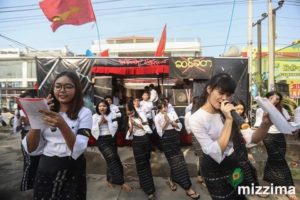 They have been charged under the 66 (d) of the Telecommunication Law for defamation, and the 505 (a) of Burma’s Penal Code. 505 (a) criminalises any statements or rumours “with intent to cause, or which is likely to cause, any officer, soldier, sailor or airman in the Army, Navy or Air Force to mutiny or otherwise disregard or fail in his duty as such.”

The Peacock Generation Thangyat group includes current and former members of the Student Union in Burma. Currently, Khaing Tun, Zayar Lwin, Paing Ye Thu, Di Yay, Su Yadanar Myint, Nyein Chan Soe and Pho Thar are being detained in Insein prison while their trial continues. If they are convicted, they face up to two years in jail with a fine.

“Repressive laws are continuously being used in Burma to arbitrarily arrest activists and suppress freedom of expression,” said Wai Hnin, Campaigns Officer at Burma Campaign UK. “The NLD has the majority in Parliament to repeal the repressive laws but Aung San Suu Kyi has decided to keep those laws intact and keep human rights activists in jail. These activists being thrown into prison for their satirical performance is one of the many reminders that Burma is still far from becoming a country with genuine democracy.”