Please join us and Naomi Long MP on Tuesday 3rd February 2015, at 11.30 AM, to deliver more than 2,000 rose-tinted glasses, petitions and campaign postcards as part of our campaign to persuade the British government to stop looking at Burma through rose-tinted glasses, and return to putting human rights as their top priority in Burma. 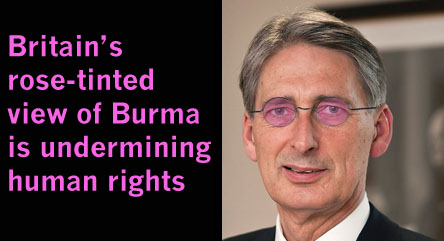 In recent months, Aung San Suu Kyi, President Obama and the United Nations have all said that Burma’s reform process is stalled, backsliding, or backtracking.

The number of political prisoners has increased five-fold to 160.

Repression of the ethnic Rohingya is increasing.

New laws are being proposed which could restrict the right of women to marry non-Buddhists.

Burmese Army attacks in ethnic states continue, as has the use of rape and sexual violence.

Despite this, the British government refuses to admit the reform process has stalled. Instead, Ministers still talk up reforms, play down human rights violations, and focus on promoting trade and investment.

Our rose-tinted glasses campaign has been highly effective at highlighting how the British government has not based its policies on Burma on the realities on the ground. The campaign has featured in the media in the UK and in Burma, and in debates in Parliament.

Your support on the day will mean a lot to us, and help us have a bigger impact both in terms of influencing the government, and receiving media coverage.

I hope you can join us on the day.