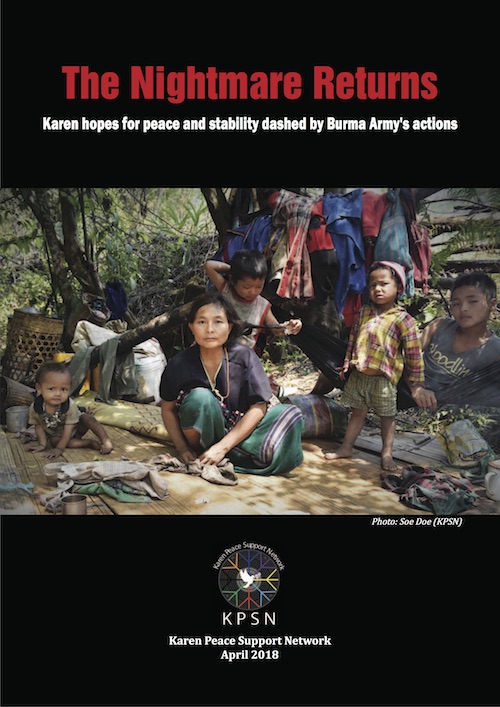 A report and documentary film by the Karen Peace Support Network produced to highlight the ongoing plight of the Karen people who must continue to flee the Burma Army’s military operations despite the existence of ceasefire agreements, including the Nationwide Ceasefire Agreement (NCA). The Burma Army’s actions and resulting humanitarian crises require urgent action from the government of Burma and the international community.

On March 4 2018, the Burma Army began the largest and most coordinated deployment of troops into Karen State’s Mutraw (Hpapun) district since 2008, breaching the terms of the NCA and provoking multiple clashes with the Karen National Liberation Army’s (KNLA) 5th Brigade. Burma Army soldiers have indiscriminately targeted civilians while more than 2,400 villagers have been forced to flee their land and homes. The majority of those displaced by the Burma Army’s current operations had only recently returned to rebuild their villages, farms, and livelihoods following decades attacks by the Burma Army and displacement in the area.

The KNU and Burma Army are both signatories to the 2015 NCA, which prohibits the expansion of military infrastructure and troop reinforcements in ceasefire areas. However, since March 4th, at least eight Burma Army battalions have entered Luthaw, without the required prior agreement  from the KNLA, and begun constructing a military operations road to connect their military bases. If the road is built, Indigenous Karen villagers may be permanently displaced from their homes and ancestral village territories.

The ceasefire gave people a sense of hope that, perhaps, peace was at hand. The Burma Army’s renewed attacks and road construction activities have shattered this hope by once again forcing people from their land and into hiding in the forests.

The documentary can be viewed here.