Only One Person Can Stop Ethnic Cleansing In Myanmar, And It Isn’t Aung San Suu Kyi 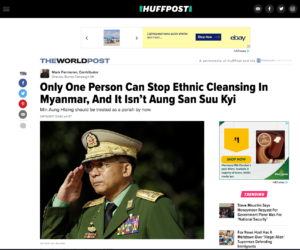 LONDON — If you haven’t been paying much attention to events in Myanmar recently, you might be shocked or surprised by Aung San Suu Kyi. Yes, her response to the violence in Rakhine state, on the country’s west coast, has been extremely disappointing. No, she shouldn’t be denying that human rights abuses are happening. Yes, she should be speaking out in defense of the Rohingya. No, you can’t take away her Nobel Peace Prize; there is no mechanism for doing so. No one knows for sure why she has taken this attitude towards the Rohingya, so stop asking.

Having got that out the way, let’s focus on what’s happening to the Rohingya right now, and what can be done about it.

The military in Myanmar, led by commander-in-chief Min Aung Hlaing, has launched a major military operation against Rohingya civilians using the pretext of hunting down militants who attacked government buildings, including police stations on Aug. 25. Since the offensive began, almost 400,000 Rohingya have fled to Bangladesh. According to Rohingya sources in exile and on the ground in Myanmar, there are an estimated 100,000 or more who have been internally displaced. Perhaps 5,000 people have been killed.

Horrific human rights violations have been committed — executions, beheadings, people being deliberately burned alive in their homes. Even children are being deliberately targeted by the military, security forces and armed militias and mobs. It’s not surprising that the United Nations High Commissioner for Human Rights, Zeid Ra’ad Al Hussein, described the military attacks against the Rohingya as a “textbook example of ethnic cleansing.”

But while the world focuses on Suu Kyi, the man responsible for these horrific abuses doesn’t get mentioned in government statements or the vast majority of media articles. Min Aung Hlaing is calling the shots. Articles about Suu Kyi are exactly what he wants to see; with more focus on her and none on him, he has more freedom to carry out his ethnic cleansing campaign.

Under Myanmar’s military-drafted constitution, Suu Kyi does not have control over the army. It is independent of her civilian-led government. The army controls the police, security services, prisons, border affairs and most of the civil service, and also appoints 25 percent of the members of parliament. Because 75 percent of MPs need to vote in favor of a constitutional change, Min Aung Hlaing effectively has a veto. He leads a second government in Myanmar, one armed with guns.

Min Aung Hlaing should be well known and treated as a pariah by now. He leads an army with one of the worst human rights records in the world. Even before this latest military offensive, it was under investigation by the U.N. for possible war crimes and crimes against humanity against the Rohingya and other ethnic groups in Myanmar. Even after reforms began, Min Aung Hlaing’s army has been engaged in domestic conflicts, most recently in Kachin State and Shan State, where his soldiers killed civilians.

Min Aung Hlaing is guilty of ethnic cleansing, he is under investigation for war crimes and crimes against humanity and he is the biggest obstacle to democratic reform in Myanmar. Nevertheless, not only is he not facing international pressure, he is embraced by the international community.

Last October, President Obama lifted most of the U.S. sanctions specifically targeting Myanmar’s military. In Europe, the British government provides the military with training at British taxpayers’ expense. Earlier this year, Min Aung Hlaing was given red-carpet treatment by the governments of Germany and Austria. They discussed military training and took him on tours of factories supplying military equipment. He was also taken to visit suppliers of military equipment on his visit to Italy last year. The European Union even invited him to address their prestigious annual meeting of military heads of EU countries.

In Asia, Min Aung Hlaing has completed visits to India and Japan this year, even meeting prime ministers in those countries. As he began his campaign of ethnic cleansing against the Rohingya, he met military heads from Vietnam and Thailand to discuss closer military ties.

The international embrace of Min Aung Hlaing, despite his record on human rights, must have played a part in his calculation that he could carry out this campaign of ethnic cleansing and get away with it. So far, he appears to have calculated correctly.

This must change. It is time his sense of impunity ended. Every tool available — diplomatic, legal, economic — must be employed to apply maximum pressure on Min Aung Hlaing. Military training and cooperation must be stopped and replaced by a policy of critical engagement. Visa bans, not red carpets, should be rolled out by the international community. Countries should impose unilateral arms embargoes until a U.N.-mandated global arms embargo can be negotiated. Countries with existing arms embargoes should expand those embargoes to cover supplying equipment of any kind to the military. Military-owned companies should be targeted with sanctions, taking care to avoid hurting the general population. The Security Council should refer the situation in Myanmar to the International Criminal Court.

There are no shortage of options for pressuring Min Aung Hlaing to stop his campaign of ethnic cleansing against the Rohingya. All that is lacking is political will. The lives of the Rohingya and other ethnic groups and the prospects of a genuinely democratic Myanmar depend on that will being found.