Burma Campaign UK today called on Foreign Secretary Philip Hammond to ensure that EU Foreign Ministers discuss the Rohingya refugee crisis when they meet on Monday. The European Union should apply pressure on Thailand, Malaysia, and Indonesia to stop pushing boats of Rohingya refugees and Bangladeshis back out to sea.

Fleeing escalating persecution in Burma, thousands of Rohingya refugees are in boats off the coasts of Thailand, Malaysia and Indonesia. Many are starving and many have died, yet these countries refuse to allow the boats to land. Some have now been at sea for months.

EU Foreign Ministers are meeting on Monday, but this crisis isn’t on the agenda of their meeting.

Unless dramatic action is taken, these refugees could die at sea, some within sight of land.  The EU must apply pressure on Thailand, Malaysia and Indonesia to allow the refugees to land.

Burma Campaign UK supporters are being asked to email the Foreign Secretary urging him to act.

The EU must apply pressure on ASEAN, the regional grouping which includes Thailand, Malaysia, Indonesia and Burma, to ensure these refugees are allowed to land their boats and given sanctuary.

Longer term, the EU must start to take action to address the root cause of this crisis, the escalating repression of the Rohingya in Burma.

“The European Union cannot stand by and do nothing while thousands of people face a slow death at sea within sight of land and safety,” said Anna Roberts, Executive Director at Burma Campaign UK. “Philip Hammond should take the lead in ensuring the EU applies pressure on ASEAN to end this crisis.” 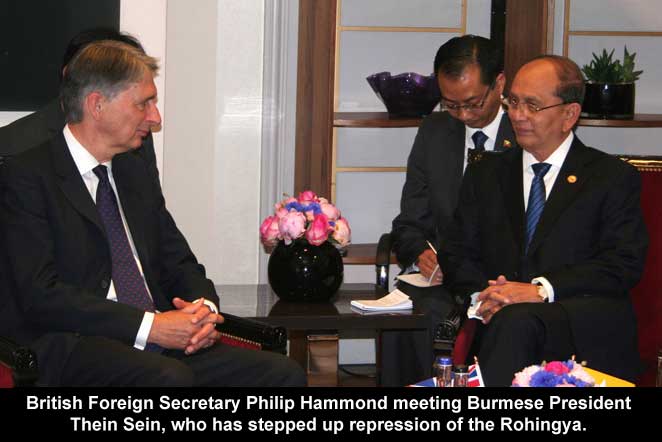