On 26th June, three journalists were arrested by the Burmese Army in Shan State.  Lawi Weng, from The Irrawaddy, and Aye Naing and Pyae Bone Naing from Democratic Voice of Burma, have not been seen or heard from since then. Four other people were arrested with them.

The seven people were returning from a drug burning ceremony held by the Ta’ang National Liberation Army, (TNLA). The TNLA is a banned organisation, and the Unlawful Association Act bans communication with them. Min Aung Hlaing’s office has said they are being held for alleged ties to the TNLA.

Aung San Suu Kyi’s government has failed to repeal the Unlawful Association Act, despite the fact that it is frequently used to detain activists, journalists and people from ethnic minorities. She also decided to keep Lahpai Gam, a Kachin farmer detained under the act, in jail, despite the United Nations ruling that his detention is illegal.

“We know that Min Aung Hlaing’s staff are regularly updating his social media accounts and they read the messages sent to him on Facebook, so we can use this to bombard him with messages to free the journalists,” said Anna Roberts, Executive Director of Burma Campaign UK. “Questions also have to be asked about why the Unlawful Association Act hasn’t been repealed when it is still being used to target journalists and activists. Progress in repealing repressive laws is far too slow, and it makes it easier for Min Aung Hlaing to use tactics of arrest and intimidation.” 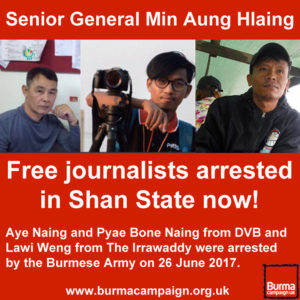