[Yangon, 7 March 2019] Myanmar authorities must drop the case against Ko Swe Win and take concrete steps to repeal Article 66(d) of the Telecommunications Law, 77 organisations said in a joint statement today. Two years ago, Ko Swe Win, editor at an online newspaper Myanmar Now, was charged with defamation under Article 66 (d) for sharing a story by the online news outlet on Facebook. The story he shared quoted a senior monk who was critical of the well-known ultranationalist monk U Wirathu. U Wirathu had previously expressed support for and thanked U Kyi Lin – the recently convicted gunman who shot and killed prominent lawyer U Ko Ni in January 2017. 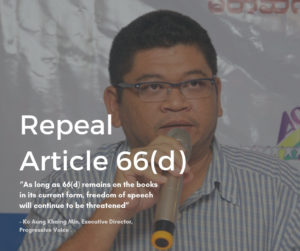 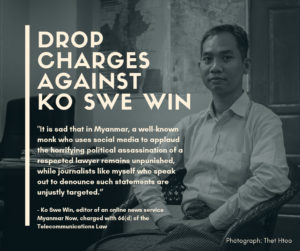 “It is sad that in Myanmar, a well-known monk who uses social media to applaud the horrifying political assassination of a respected lawyer remains unpunished, while journalists like myself who speak out to denounce such statements are unjustly targeted,” said Ko Swe Win. “This continuing use of 66(d) to silence those who expose and criticise activities like this as well as human rights violations clearly shows how powerful the authoritarian forces remain in our country despite the apparent democratic changes,” he continued.

“Freedom of expression and the public’s right to information are cornerstones of a democratic society   and if Myanmar is to continue its path towards democracy, it must take concrete measures to repeal or amend repressive legislation used to stifle free speech,” said Maung Saungkha of Athan who himself was jailed under Article 66(d) of the Telecommunications Law and has since been an outspoken proponent of reforming the law, which criminalises defamation.

“As long as 66(d) remains on the books in its current form, freedom of speech will continue to be threatened,” said Ko Aung Khaing Min of Progressive Voice.

The statement called on the Government of Myanmar and relevant authorities to take concrete steps in parliament to decriminalise defamation, repeal Article 66(d) of the Telecommunications Law and drop the charges against and release all journalists, activists and human rights defenders currently in prison and being charged under this legislation.

Read the full statement in Burmese

Read the full statement in English