Burma Campaign UK today issues a new briefing paper ‘The Military Coup Threat Myth’. It examines a persistent myth that the military in Burma are looking for an excuse to retake direct control of the country and that this is now being used to justify inaction over the ethnic cleansing and possible genocide of the Rohingya.

While a misplaced fear of a coup is understandable given Burma’s history, it misreads the current political set-up in the country. The political system in Burma now is entirely the creation of the military. It has been painstakingly designed by them to protect their interests while at the same time relieving the domestic and internal pressure they were under. It has and is working very well for them.

To retake direct control would undo more than a decade’s worth of painstaking work to create the system currently in place.

The briefing is available here. 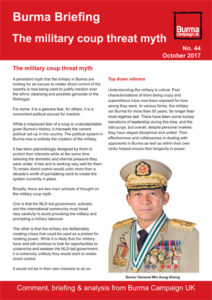