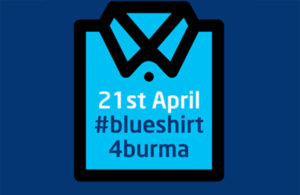 21 April 2021 is the seventh anniversary of the death of U Win Tin – journalist, democracy activist, founding member of the National League for Democracy, and one of Burma’s most high profile and respected political prisoners. He spent over 19 years in prison.

People around the world will be wearing a blue shirt or blue clothing to raise awareness about Burma’s growing political prisoner population, and in solidarity with those activists in jail for supporting human rights and democracy.

Arrest, torture and forced disappearances are taking place daily in Burma since the military staged a coup on 1 February. There are now more than 3200 political prisoners, who are being imprisoned for peacefully protesting and speaking out against the military. This figure does not include people who have been arrested or simply disappeared in very remote ethnic areas.

Please join Blue Shirt Day on Wednesday 21st April. Wear blue, post pictures on social media, and tell the world that there is a growing number of political prisoners in Burma, and that they must be freed immediately. 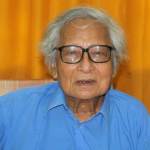 “If there are no political prisoners … I will take off my shirt but up until now I haven’t seen good indications.”
U Win Tin