The report is available here.

The reporting period was marked by increased armed conflict and attacks, which spread to locations in KHRG’s operational area that had reported little to no fighting or shelling during the initial five months following the February 1st 2021 military coup.

A surge of armed conflict and attacks, including airstrikes, took place in the Lay Kay Kaw area of Dooplaya District in December 2021 after State Administration Council (SAC) and Border Guard Force (BGF) troops entered the area and conducted raids and arrests while searching for Civil Disobedience Movement (CDM) participants and People’s Defence Force (PDF) members. Over 10,000 people were displaced in just over a week. Possibilities for seeking refuge in Thailand remain extremely limited. Most displaced villagers were either pushed back by Thai authorities or forced to set up temporary encampments along the river. 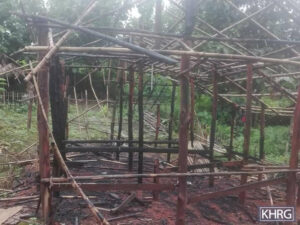 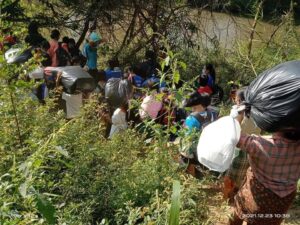 Mu Traw (Hpapun) District had been the target of major offensives, including airstrikes, during the first five months of the coup. Although there were no further airstrikes in Mu Traw District from July to December 2021, most parts of the district continued to experience heavy conflict and military activities, with some areas experiencing fighting and shelling on a near daily basis. Many villagers continue to face displacement, while those who have remained in their villages have endured repeated threats by SAC soldiers, including battalion commanders, who seek to punish civilians for the activities of the Karen National Liberation Army (KNLA).

The reporting period was also marked by an increase in human rights violations, including forced labour, the use of human shields, torture, killings, theft and looting, and the planting of landmines.

Incidents of forced labour, including the use of civilians as human shields, have become more widespread and systematic because tied to the movement of SAC and BGF troops through KNU- controlled areas while rotating troops or bringing food rations, supplies and ammunition to more remote army camps. In many cases, these acts were combined with other rights violations like beatings or torture, the deprivation of food and water, and various threats, including threat to life.

Theft and looting, particularly of food items, crops and livestock, also became more systematic as the presence of SAC soldiers in rural areas, including KNU territory, spread. Theft and looting often took place after villagers were forced to flee their homes, and in some cases included the destruction of property.

As the SAC continued to target anyone seen as opposing the military regime, it undertook violence, including torture and beatings, against civilians while searching for people whom they suspected of having an affiliation with the PDF and CDM. There has also been an increase in intentional killings of civilians by SAC security forces.

The situation of rural villagers in Karen State has grown more critical, with many villagers now facing severe food insecurity and health issues, including the spread of COVID-19, with little access to external support.

KHRG hopes that this field report will allow national and international stakeholders to gain a better understanding the impact of SAC atrocities in Southeast Burma. It includes a number of recommendations on how national and international stakeholders can develop more inclusive support schemes that ensure the protection and well-being of rural villagers.

-Neighbouring states must allow for the legal provision of cross-border humanitarian aid through non-state actors and local service providers.

-The UN, donors and other international actors must support and increase the legitimacy of the CSOs, CBOs and ethnic health and aid providers operating on the ground because they have the most direct and best access to affected populations and understand their needs.

-A comprehensive global arms embargo against the Burma military must be imposed.

-Military “No Fly Zones” need to be established and enforced; and sanctions must be placed on supplying aviation fuel to the Burma military.

-UN agencies in Burma must take a clear and strong position in responding to the situation on the ground, and to use all possible resources to limit the human rights abuses and violations undertaken by the SAC.

The full report is available here.