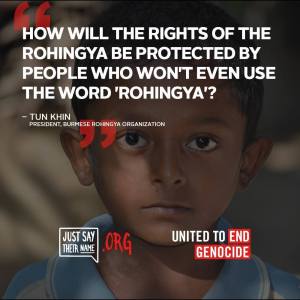 Economic reform has taken preference over political reform in Burma, said an international human rights group campaigning for the release of what it terms political prisoners still jailed in the country.

The Burma Campaign UK is urging Britain’s foreign secretary to pressure the Naypyidaw government as part of its No Political Prisoner Left Behind campaign.

“Economic reform has been given greater priority than political reforms by the Burmese government, yet still Burma is being ranked as one of the most difficult countries in the world to do business in,” campaign director Mark Farmaner told The Irrawaddy.

He was referring to a recent World Bank global study that ranked Burma as one of the worst places to do business because of numerous bureaucratic and legal obstacles. For example, a company wishing to build a warehouse has to go through 16 application processes which on average takes 159 days.

Burma Campaign UK is petitioning the British government to pressure Naypyidaw to free Htin Kyaw, a leader of the Movement for Democracy Current Force that campaigns against land grabbing. He was arrested in May for protesting without permission and distributing leaflets that criticized the government, said Farmaner. Htin Kyaw is now serving a nine-year sentence in Insein prison.

On the Frontline: Poverty, Opium and Militarisation in Modern Burma’s Golden Triangle September 11, 2014

‘In the past 8 years opium production in Burma has nearly tripled. Ninety-seven percent of Southeast Asia’s opium is produced in Burma, with 92% of production located in Shan State in the east of the country. Shan State is mountainous and home to many ethnic peoples, such as the Ta’ang whose villages and pagodas cover the hilltops of the state’s northern townships. This tortuous landscape of tea plantations and paddy farms has become one of the epicenters of the region’s bourgeoning heroin and methamphetamine trade.

In the poor and largely inaccessible villages of northern Shan State’s Namkham Township up to 80% of young Ta’ang men are addicted to drugs, namely heroin and an Amphetamine Type Stimulant (ATS) known as Yabba. “In our Ta’ang area drugs can be found and bought everywhere and many people are becoming addicts. Because of this the education and healthcare situation is getting very low in Ta’ang communities”, explained U Ban Di Sa, the Buddhist monk and founder of the Ta’ang Monk’s Union. U Ban Di Sa accused the central government of being complicit in the drugs trade, saying that “The central government has used drugs as a political tool to maintain their power.”’

Burma’s President Thein Sein in the Hague At Last September 11, 2014

Article in the Huffington Post by Mark Farmaner, Director at Burma Campaign UK.

“This week Thein Sein, President of Burma, will be visiting The Hague, in the Netherlands. As a man with a lot of blood on his hands, you might be thinking this is long overdue. But instead of being indicted at the International Criminal Court (ICC) for his involvement in war crimes and crimes against humanity, Thein Sein will be receiving red carpet treatment from the Dutch government.

In a few short years, the Netherlands has gone from a country that strongly supported human rights in Burma, to a country prepared to ignore the multiple violations of international law since Thein Sein became President in 2011, and the numerous violations of international law that took place during the 14 years that he was on the ruling council of the previous military dictatorship.”

Anna Roberts and Emily Butler at the TUC in Liverpool with our photo wall of new supporters for Burma Campaign UK’s Rose-Tinted Glasses campaign! 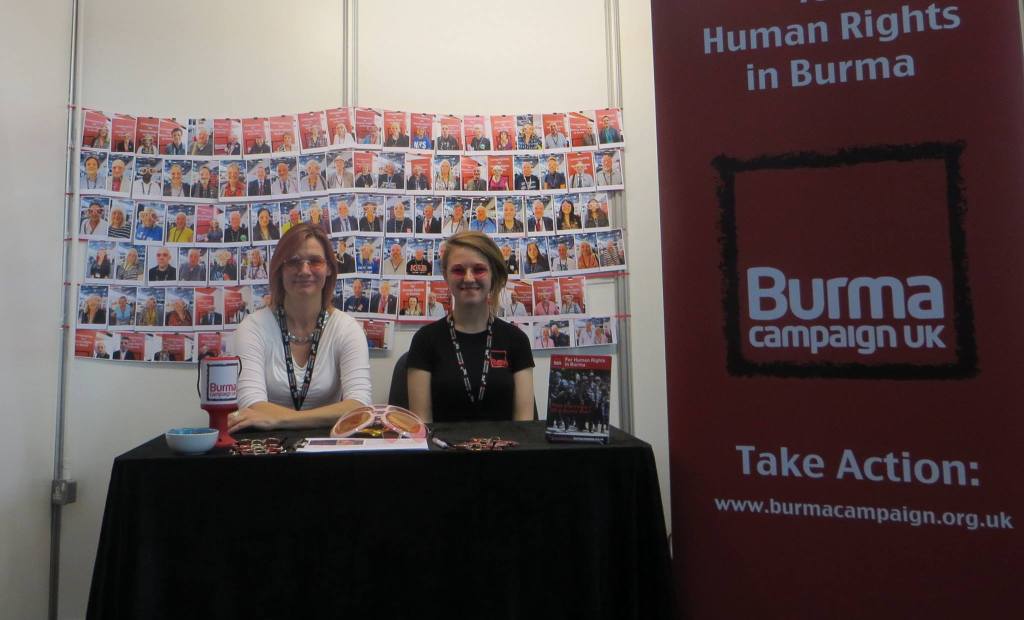 ‘The British government is promoting its own interests in Burma’ August 18, 2014

‘The government policy on Burma is soft,’ says Zoya Phan with a hint of anger in her voice. ‘They are promoting their own trade and business interests. I want to see a more robust policy from [British Prime Minister] David Cameron that challenges the government in Burma and tackles their impunity.’

A member of Burma’s Karen ethnic minority, Zoya was named after Zoya Kosmodemyanskaya, a Russian partisan who died fighting against the Nazis at the age of 18. Unlike her namesake, Zoya, now 33 and living in England, managed to escape the clutches of a despotic invasion and has become the global voice for the Karen community. While she was able to escape a cycle of suffering, hundreds of thousands of her people are still trapped and at the mercy of the military junta. 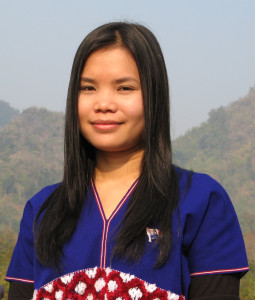 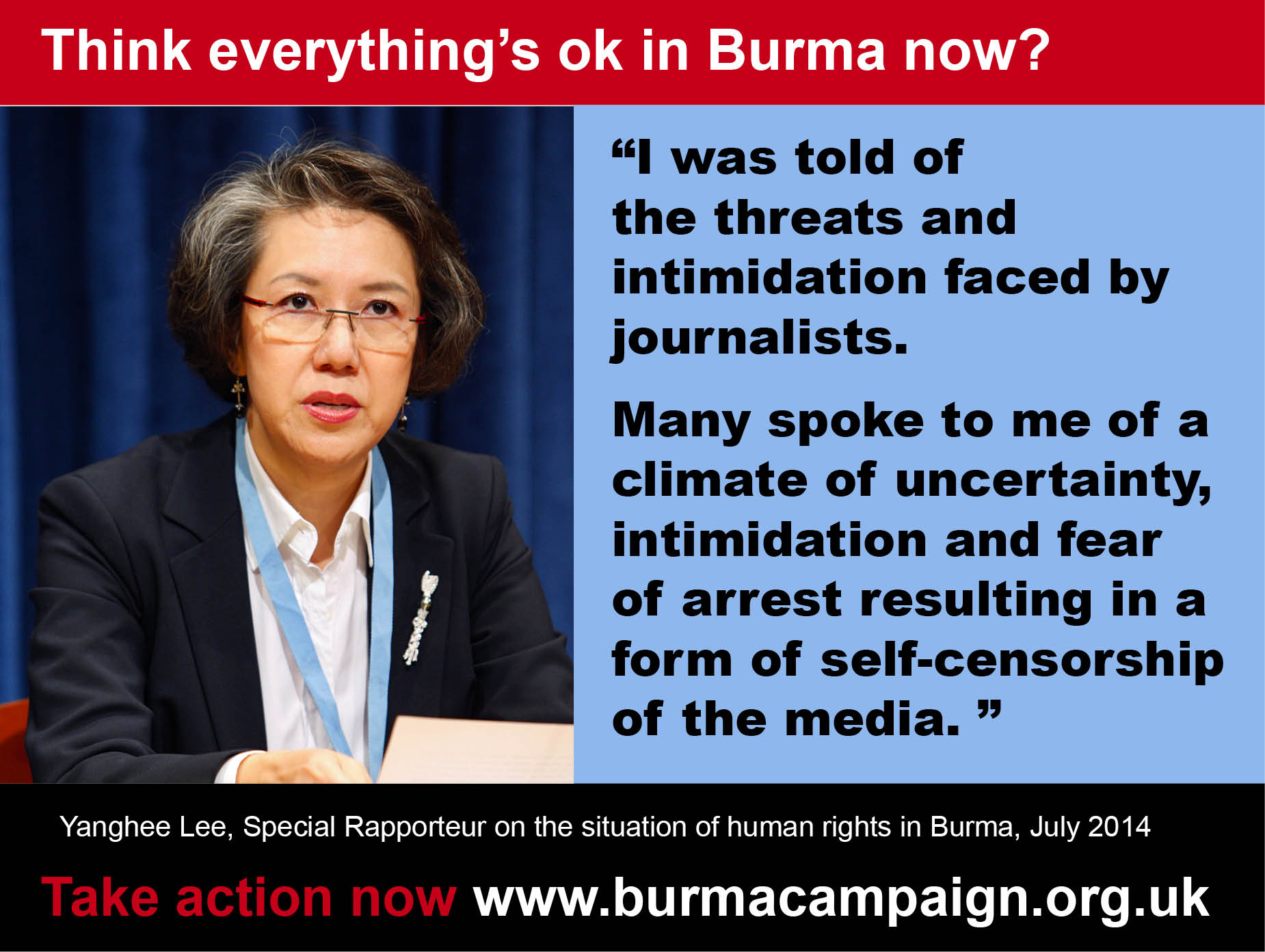 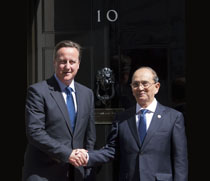