Burma villagers’ battle to vote in the general election November 7, 2015

Our briefing paper on the election is quoted in the Telegraph today:

“The UK Burma Campaign estimates that up to 10 million people – around 20 per cent of the country’s population – may be unable to go to the polls. The electoral commission has cited ethnic conflict as a reason to cancel the election in some areas, and the persecuted Rohingya Muslim minority of around one million people have been deliberately disenfranchised, but there could be many others, like those in Hine U, who are simply not on the list.”

Burma Campaign UK is quoted in this article in Al Jazeera:

Aung San Suu Kyi’s opposition party is expected to win big, but even a landslide may not bring significant change.

“Just like all the previous elections, this election will not address key issues relating to ethnic rights and aspiration such as self-determination,” said Zoya Phan, an ethnic Karen activist and campaigns manager at Burma Campaign UK, an advocacy group. “Whoever wins the elections, the military still has ultimate control over Burma, guaranteed by the 2008 constitution. As a result, attacks and discrimination against ethnic minorities will continue.” 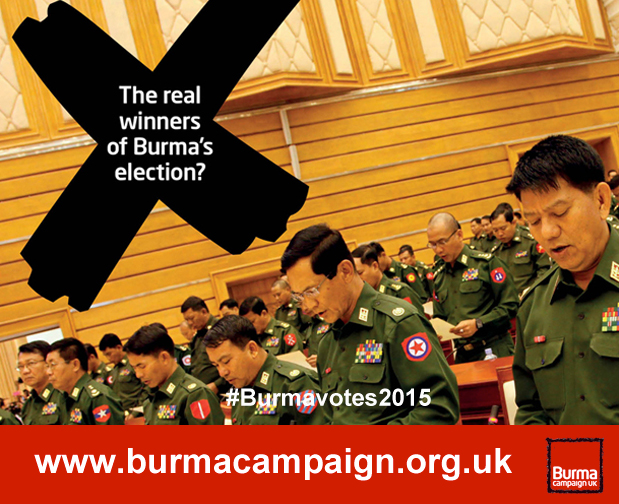 Should have read the small print November 7, 2015

November’s election keeps being described as a turning point in Burma’s transition to democracy. But Burma isn’t transitioning to democracy. It is transitioning into a new form of hybrid regime. The first major step in the reform process was the implementation of the undemocratic 2008 Constitution. The elections tomorrow take place under that constitution. Of course the military know the National League for Democracy (NLD) is likely to win the most seats, or even its hoped-for landslide. Of course they know there is a chance of the NLD forming a government, if not at this election, then at some point in the future. After all these years of planning, do people seriously think the military have left anything to chance?

With the 2008 Constitution, the military carefully designed a political structure that preserves their power and influence, even if the NLD or another non-military party is in government. Even if the NLD wins, in parliament the military have 25 percent of the seats and veto power over constitutional change.

In government they appoint key ministers such as defence, home affairs and border affairs. This means an NLD-led government will not have control over the armed forces, the police or justice system, or over the most critical and sensitive political issue in Burma: policy in ethnic states. Under an NLD government, a serving soldier involved in war crimes could still be serving as Home Affairs minister and ordering the arrest and prosecution of peaceful protestors.

In the unlikely event all its other fail-safes do fail, as its ultimate security, the military has the legal right to have a coup, taking back direct day-to-day control, for vague and unspecified national security and unity reasons. As if any future NLD or other government weren’t already hamstrung enough, the ever-hanging threat of a coup can also be used to limit what the NLD does.

The military obviously won’t want there to be an NLD landslide at the election. The promotion of Ma-Ba-Tha, unfair election rules, and a hundred other small and large tactics are being used to try to limit their success. Nor do they want Aung San Suu Kyi as president. She is too powerful a political figure to risk allowing to be president. But no other figure in Burma carries the clout she does, and the constitution is designed to allow an NLD victory as long as she isn’t running the government.

An NLD-led government is likely to be a big improvement on one led by Thein Sein. Many hope new political space can be expanded in ways the military neither expect nor planned for, chipping away at their power and securing more rights. This is likely to be a long slow process with human rights violations, poverty, and conflict continuing for many years to come. For these people, the slow pace of change is literally a matter of life or death.

Although it could usher in welcome change for many, tomorrow’s election won’t be a turning point in a transition to democracy as it is being talked up to be. Instead, it is another step in the military’s carefully thought-out plan to transition from direct military rule and pariah status to a new hybrid authoritarian state which is accepted by the international community. The military have as much at stake as anyone in Burma in ensuring November’s elections go smoothly. Regardless of votes cast on the day, they have made sure they’ll be the ultimate winners.

The article is published by Democratic Voice of Burma here. 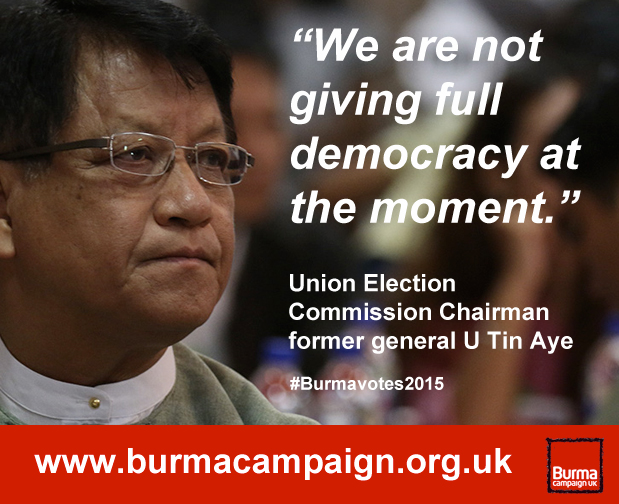 Elections in Burma are scheduled for 8 November. Our new briefing paper looks at what is likely to happen after election day, the process of the elections, and key election statistics. 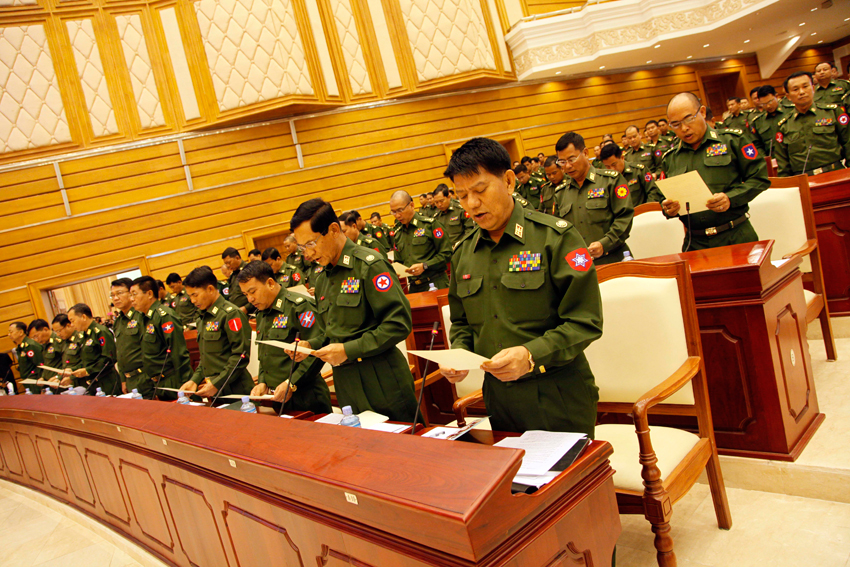 An article in The Irrawaddy about a detailed report released by Global Witness on Friday, which alleged widespread corruption in Burma’s multibillion dollar jade trade at the behest of the military, senior figures from the former junta and individuals connected to the drug trade.

“British Burma policy is such a mess that frontmen for dodgy drug dealers are free to visit the UK,” he told The Irrawaddy. “Unlike the USA, they have no list of people in Burma linked with crime and human rights violations who are barred from the country, or who British companies are barred from doing business with.”

A British man held in Myanmar’s most notorious jail is wasting away in a tiny cell with no window and an open sewer for a toilet while the British government is ignoring pleas to intervene, his father has told the Guardian.

The family has also been working with the Burma Campaign UK charity which accused foreign office minister Hugo Swire this week of abandoning Blackwood’s case by refusing to call for his release during a recent visit to Yangon.

Mark Farmaner, director of Burma Campaign UK, said: “Hugo Swire seems prepared to let an innocent British citizen and his colleagues rot in a Burmese jail rather than risk upsetting his new friends in the Burmese regime.”

A British bar manager jailed in a notorious Rangoon prison for insulting Buddhism is to be named as a prisoner of conscience by Amnesty International as his family and human rights activists campaign for his release.

Burma Campaign UK, an activist group, this week described Mr Blackwood as a political prisoner and accused Hugo Swire, the foreign minister for Asia, of abandoning him to “rot” in Insein rather than risk British interests by pressing his plight with Burma.

You can take action to help free Philip Blackwood and all political prisoners in Burma here. 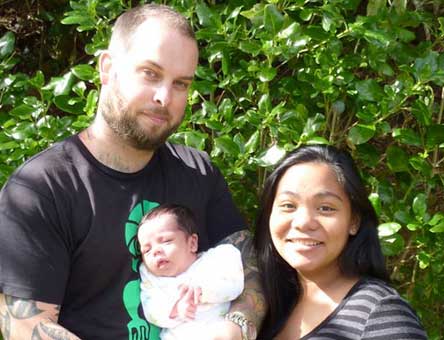 An article in DVB about the case of Philip Blackwood:

“Phil Blackwood, a bar-restaurant manager who has been incarcerated in Rangoon’s Insein Prison for nearly ten months, is malnourished and suffering from mental stress, according to his parents in Wellington, New Zealand.

Speaking to DVB this week, Brian and Angela Blackwood said, “Philip had lost over 20 kilogrammes when we saw him in late May/early June, and this weight loss has continued. He has now lost 30 to 35 kg.

“It was obvious then that his mental state was an issue even though he tried to hide it from us. Philip is trying to put on a brave face regarding his health so as not to worry his loved ones. This does not, however, disguise the fact that he is malnourished and suffering a great deal of mental stress. He is taking anti-depressants to get by.”

On 5 October, Burma Campaign UK released a statement accusing Foreign Office Minister Hugo Swire of “failing in one of his most fundamental duties – the support and protection of British citizens overseas.”

“When Foreign Office Minister Hugo Swire visited Burma a few weeks ago, and met with Burmese government officials, he didn’t even call for the release of Philip Blackwood or the other two political prisoners in this case,” the statement said.

“The Foreign Office is trying to treat this as a lower level consular case, rather than a political case where ministers must intervene. They are also trying to hide behind Philip’s dual nationality, saying consular arrangements have to be made with New Zealand. This is a red herring, as this should not be treated as simply a consular case. There is no justice or rule of law in Burma.”

Burma Campaign UK has launched an online petition calling for the release of Phil Blackwood and his Burmese colleagues Tun Thurein and Htut Ko Ko Lwin.”

This month’s edition is out and has everything Burma related that was raised in the British Parliament last month. 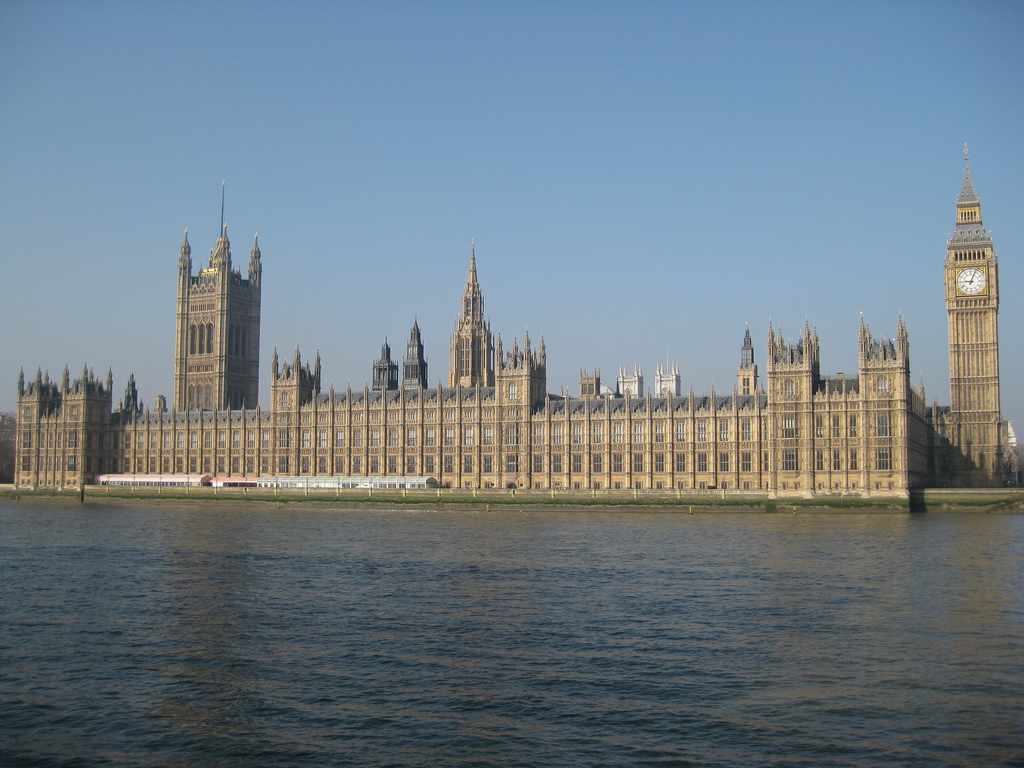